The Glory of Rome: +25% Production in other Cities toward any Building that exists in the Capital.

Rome is one of the 61 civs in the Civ Battle Royale. It was lead by Augustus Caesar, and its capital was Rome. Situated on the Italian Peninsula, Caesar came under attack by his neighbors, and was eliminated in Part 14, the first civ to be eliminated, at 61st place. 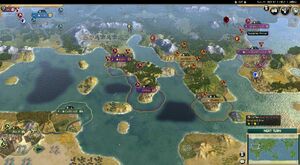 "Caesar’s got some problems on his hands. Rome starts off situated in the middle of the Italian peninsula, surrounded on all sides by water and mountains to the north. Although these mountains give Rome a defensive advantage against Germany and Poland, it leaves the land-focused civ little land to settle. Caesar will have to quickly settle south of France and in Iberia in order to have any land advantage over his neighbors. With Germany to the north, France to the west, Sparta to the east, and Carthage to the south, Rome is completely surrounded by warmongering civs. Fortunately Rome has strong Legions and Ballistas to help them expand and conquer in the Classical era. Caesar should easily be able to dominate his more late-game-focused neighbors like France and Germany early on. However, if he fails to exploit his early game advantages, Caesar might become irrelevant later on." Narrator of Part 1

Due to his starting point and his UU, he was classified 31st in the initial power rankings.

For a full, exhaustive, story of Rome in Civbattleroyale II, see Rome: A Retrospective by u/bluesox; original post here.

For the first 30 turns, Rome tried to gather as much land as possible, founding two more cities; however, Sparta and France soon formed a coalition and declared war against Augustus. This war went evenly until Caesar made a huge mistake, settling Neapolis over the Alps; after 6 turns,France conquered this city and peaced out.

Thanks to a Polish scout peacekeeper, Cumae was untouched, so Leonidas changed his mind, peace with Rome and declare war against Byzantium and Poland. But only 13 turns later, Leonidas DoW-ed Rome again, with his new friend Portugal (turn 102). However, in a surprising turn of events, Rome was able to settle two more cities and even go to the offensive. The result is the conquest of Funchal, a Portuguese city.

In turn 126, Rome and Sparta peaced out; Cumae lost some land due to a Spartan citadel, but nothing more. However, Maria started to bring some more units in order to recapture Funchal, which flipped a couple of time.

In turn 142, the Roman history changed forever; both Napoleon and Sparta declared war AGAIN, with Hitler already in the action since turn 140;

in the same turn, Portugal flipped Funchal again and gained Arrentium. Rome's position became very dangerous, and Cumae was besieged by FOUR spartan citadels. However, Leonidas decided to attack Antium instead, conquering it on turn 158, and securing it ten turns later, after a couple of flip. Luckily, Portugal was distracted by Hannibal.

Finally, France decided to bring some units on the front, and Sparta started to deploy some crossbowmen. The end was near, and Cumae became part of the Spartan Empire (turn 184). Leonidas continued to push and brought Ravenna into deep red, when, out of nowhere, a single French knight sniped it. (turn 193)

However, without hesitation, Leonidas marched against the capital, and after a few more turns, Rome fell into Spartan hands (turn 201). This meant Rome was the first civ to lose all its cities. However, a Roman legion and a Roman ballista continued to explore the world and to keep high the glory of Rome.

Since in the Civ Battle Royale the units of a civ aren't deleted if a Civilization lose all its cities, a last Roman Ballista and a last Roman Legion started to wander in East Europe. They soon became very popular among the users of r/civbattleroyale.

An interesting fact is that Last Legion's host was initially Alexios of Byzantium. In the real world, the Byzantine Empire considered themselves the spiritual successor of the Romans. After Alexios' suicide, the Last Legion was confined to the Black Sea.

Much Original Content were created for the last legion, for example this one (credit to u/ScottishMongol).

Another Original Content, again by u/ScottishMongol, described the last and heroic resistance of Rome.

And another one, by u/DocIdo, describes the "adventure" of the anachronistic Last Legion

If you are looking for the movements of the Last Legion, say thanks to u/AnimePirate and read his post

Community content is available under CC-BY-SA unless otherwise noted.